The Friends of the Old Lewiston Schoolhouse Library and Museum (FOLSLM) is a group of determined donors and volunteers who have teamed up for a common cause: The success of the small community library and historical museum located inside the renovated schoolhouse that served the people of Lewiston from the town's glory days of the California Gold Rush through the construction of the Trinity Dam in the 1950's. Ours is a certified non-profit organization, and has grown to become one of northern California's most successful and highly esteemed community service organizations since its beginnings nearly twenty years ago. With a membership numbering in the hundreds, its ranks include legions of supporters spread across the United States. But its core supporters are, naturally, the citizens of Trinity County who have worked to make it a valuable asset to the community of Lewiston.

The organization was spearheaded by the efforts of lifelong Trinity County resident, Doris Callahan, (pictured at left, taking stock of some museum elements during her final visit to the historic building in 2008). Mrs. Callahan's grandfather, Commodore Kise, attended class at the school around the turn of the last century. Some of the man's personal effects from his school days were donated to the town's Pioneer Museum, which was introduced inside the Old Lewiston Schoolhouse in the mid-1990s, as a complement to the library. The historic Kise House (1875) next door to the Schoolhouse belonged to Doris's great-uncle, whom she visited often, spending many a summer frolicking as a young girl in the shadow of the old building. 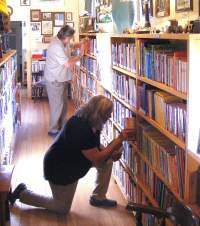 Our volunteer "staff" consists of a few dozen locals who are called upon throughout the year for various duties that benefit the schoolhouse. From lending a hand for seasonal fundraisers to playing hostess to the public during visitors hours, our people are the bedrock on which the schoolhouse is built.

When the need arises, we've even been known to solicit the services of local businesses and craftspeople who are always happy to participate. There is no limit to the generosity and dedication of all our supporters, and without them, our beloved library and museum could never be the same. 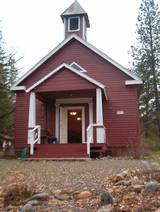 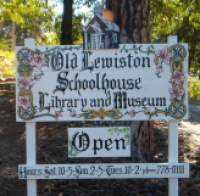 Nestled among the trees of Old Town Lewiston, near the junction of Turnpike and Deadwood Roads, The Old Lewiston Schoolhouse overlooks the Lewiston Historic District, as she has for more than a century and most certainly will a hundred years from now. Some of us like to think of the old gal as a beatific lighthouse, standing resolutely like a beacon in the fog, offering guidance to wayward ships who, like lost souls search desperately for something, anything that resembles a refuge from the storm. Those ships are us, the people of this fine town, and she provides us all with some glimmer of hope for the future. Yes, our glorious schoolhouse: The history she has seen, and the future only she could know. We bask in her beauty; we gaze, awestruck by her magnificence,
and we honor her because she honors us. We are lucky to have her. Still.